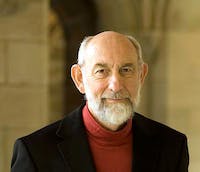 Denis Muller is one of Australia’s foremost scholars in the field of media ethics. He has advised Australia’s two media accountability regulators, the Australian Media and Communications Authority and the Australian Press Council, and was a consultant to the Australian Government’s Independent Inquiry into Media and Media Regulation (2011-2012).

He practised journalism for 27 years, mainly on The Sydney Morning Herald and The Age, where he occupied senior positions in editorial management.

He is the author of Journalism Ethics for the Digital Age (Scribe Publications, July 2014) and of Journalism, Trauma and the Treatment of Vulnerable People (in press).

He teaches media ethics and media law in the Masters of Journalism program at the Centre for Advancing Journalism at the University of Melbourne.